Can pricing change your business? Sure it can!

Innovation isn’t only limited to the product, the other P’s can also be leveraged for innovation.  As product marketers / product managers, we can drive innovation with pricing, placement and promotion.   Todd Sattersten has created this presentation which leverages pictures to provide insight into how pricing can change the business.  this is a follow up to the eBook on Pricing he did in early 2010.  Worth the click through – thanks todd!

Things I have already learned in 2008: Check Out Blog

So I’m one of those odd ducks that actually looks forward those moments when I run into one of those “I don’t/didn’t know moments” – these are opportunities, not moments to dodge. I’ve doing a bunch of random research the past couple of weeks and had only modest time to do anything with the holiday’s thrown in, but I’ve already have some interesting things I have actually already realized or learned in the past couple of days, but mainly I thought I would talk about the Wal-Mart blog.

Check Out Blog is an amazingly well written blog with an interesting set of characters. ( Go Rand! [tag]Sustainability[/tag] is good, I’ve been [tag]compact fluorescent[/tag] for years and not recycling is essentially a crime in Ann Arbor, so I got real good at it.) Man I wish it wasn’t a Wal-Mart blog, because I got a little jaded and told myself “try to give it a chance”. So I decided to dig into the authors because the authors look so happy – not unlike the Wal-Mart greeter. I’m confident that there was some be a Wal-Mart blogger contest which was only extended to buyers and merchandisers after reading their profiles, but the lady who checked me out late night in Alpharetta probably shouldn’t be a blogger.

As I continued to dig through profiles, I quickly learned, there has to be a ghostwriter somewhere in the mix, but that is not a bad thing – take Alex Cook‘s profile with the following statement:

In layman’s terms, I work with a group of professional buyers that are responsible for buying all the pc’s (and cool stuff that plugs into the PC’s) for the Wal-Mart stores in the U.S.

So as a technologist, I couldn’t think of keyboards and mice as cool things that plug into a computer, so I browsed walmart.com and indeed found “cool” things to plug into my PC, like the mouse below. 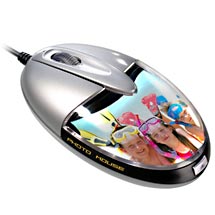 I agree, resting my hand on a picture of my family on holiday could be considered cool, providing I was put in a time machine and was able to plug it into my rad as hell 486 Hewlett Packard while scorching my way online at 14.4 with my new mouse resting on a mouse pad with a picture of my college dog Chumley. But the best bio is Tif’s.

I am the [tag]video game software[/tag] buyer for Wal-Mart, but before starting this role, I did not own a single video game or [tag]video game platform[/tag]. Since that time, I have joined the legions of game players across the globe and proudly sit in the corner clicking away on my NDS while my boxer dogs, Makeda & Rohan, watch with disdain because I’m not paying attention to them. I have been a buyer with Wal-Mart for more than 8 years and have bought a vast array of items from movies to paint. I greatly enjoy my role with the company that harvested me out of the [tag]University of Arkansas[/tag] of which I am a very proud alumni….Woo Pig Sooie, Go Hogs!

Not only does she have an inner gamer, she likes football and was apparently harvested, like corn – ahh fall is such a fun time in Arkansas. All that is required for an all-in demographic win is a NASCAR reference, which oddly doesn’t exist on the blog – I searched. While the rules of blogging and the concept of transparency for corporate blogging might be fuzzy, outside of sustainability man, the personalities of the blog are just right. Kinda a Goldilocks approach to authors.

Wal-Mart has actually done a great job, despite my jabs at the authors. The team at Check Out have created a platform for collaboration, easily understood content and provides a human aspect to an otherwise less than human organization that used geographic information systems and analysis to destroy downtown Americana. As I read the profiles the other thing I notice was folks work their a long time – how many employers have folks with this type of tenure 7, 13, or 14 years? Can’t be a bad company when folks, like Danielle Pribbernow, “look forward to a long career” there and with a name like Pribbernow there has to be endless fun in meetings. “Ok now let’s plan for the next steps now, no I really mean now – like Pribbernow damn it!” Ok maybe there aren’t a bunch of things do with the name, but I like saying the name. Say it three times fast.

So kudo’s to WM for their efforts at Check Out, while I’m not sure I’m good with their assertion that all lanes are open, I’m definitely good with such a large company trying to engage their customers in a dialogue by understanding the following:

Know you audience – The most likely readers are the gamers, so produce content mainly for them. A great deal of folks who want to save the environment read blogs so put something out there for them. A targeted approach to extend the brand identity to be a more eco-friendly and Rand does that well, What is your PSP?

Don’t Overextend – They don’t try and be thought leaders, just factoid folks who don’t seem to sell that much, but provide information about the products. The type of stuff I might ask in a store from a Wal-Mart team member should I actually be able to locate one. IDEA: Put the blog on Kiosks in-store to help answer questions, locate products and take applications, multiple purposes will help prop up the ROI.