The launch of the latest interim board for Social Media Club has been an interesting thing. The traction has been pretty good and the numbers, while they may or may tie out in the press release to exactly 42 – they are directionally correct. So here is the “Social Media Dashboard” for the market launch:

With the email distribution of the “dashboard”, some of the board members have started their lessons learned phase and improvement iteration already. I suspect each member in their own way is executing something in the context of the “do goood” governance model – posting, actioning feedback and identifying a path forward. This is starting to look like a business and just like a business this dashboard information is a limited and latent view of the ongoing evolution of the conversation around the new board.

The conversation is all over the place – pros and cons. I thought I would spend some time to provide a little context to the metrics and information above for those of you who haven’t decided to get involved YET or may never get involved.

The release and follow up content is establishing an initial inertia which previously didn’t exist for the social club. More content the better -right? There is no such thing as bad publicity, so I encourage @AmandaChapel to crank up the “hyperbol-ic” satire machine and go. Afterall, it is all upside. Even the group’s lemonade solution of the press release miscount, “the search for member 42”, has been reasonably fruitful and hopefully folks that want to be on the board push it well beyond the 35+ comments of interest.

In general, volunteer groups need more members and the social media club go some in the past week. So it appears the formation of the interim group is building the membership and awareness consistent with it’s corporate speak goes.

While the momentum math is a little fuzzy, if you consider all the tweets and board member posts is considerably larger than represented above and it appears to be how you size the impact of an event in social media, increasing the share of voice. Without a large interim group, the reach would have been less and board size provides for increased skills coverage and redundancy for task execution. The whole concept about the board is do the work, whatever that is. That’s where the board is going – task groups, execution plans and exits. To that end, I think the use of the term interim is the correct adjective for the noun, the board.

Upon a little reflection though, these headline numbers, while interesting, may not be actionable at this point. This mirrors some of Kelly Feller’s key messages on the importance of metrics, deliverables and transparency in business around social media. As a business guy, who blogs both as an individual and as a member of a corporation, I couldn’t agreement more. Even with Eloqua, Google Analytics and WordPress stats – tough stuff to establish an increases revenue R factor.

<aside> I think overtime social media will move post the transaction and ultimately may not be a demand generation engine at all. Wouldn’t it be helpful is there was a standard based model/approach for social media metrics which could be generally accepted by businesses? </aside>

Metrics matter and is the biggest gap social media marketers have. Don’t get me wrong, metrics are available, but the one’s I’ve been watching for almost 2 years suggest that community is about customers, not prospects – at least in the B2B space which is where I exist.

If all you have is a hammer – everything is a nail.

So I clearly remember the jumping the shark episode from Happy Days and even recall thinking it was dumb when I saw it as a kid, the same with the Indy flying fridge, but I struggle to find a parallel to the board and based on these high level metrics this appears to be to be the general theme. That being said, putting Nukked the Fridge in the title does make for a killer headline. I think we have all seen enough copyblogger clones like “the 10 irrefutable laws of _________”, so I’m super groovey with the post on that level.

The whole social media ecosystem centers on the key construct of conversation. A conversational approach  is essentially the key differentiator from a market approach for new media folk and consumers in the channel. Just to let you know, it isn’t that easy to define or to develop a business justification document against conversation as a deliverable.  I know – old school business – yuck.

Even the market metaphor is innately noisy. With increased adoption, diversity of voice and new use cases some of these things will work themselves out. The most interesting factor in impact is typically time oh but if only you could cube the future. Overtime the market participants we become more diverse in their focus, capabilities and the message will morph which will aid in developing more traditional business approaches on how to achieve a tangible benefit.

Diversity is a good thing. Ultimately, if there isn’t enough diversity in the social media conversation, then the risk is we’ll all continue to drink our own Kool-Aid. We’ll continue to distribute our Purplesaurus Rex on our blogs, friendfeeds and tweets with limited awareness, minimal credibility and acceptance. So perhaps the general goals of the Social Media Culb of awareness and adoption will help diversify the predominately “everything is cool, build it and they will come and rainbows and unicorns messaging platform”.

There is definitely the risk of the social media marketers to plateau as the deadhead equivalent of a marketer. At this point, the social media’s value prop is at best the revenue equivalent of “Kind grilled cheese & veggie pitas made with love for only a $1”, which trust me doesn’t scale and can’t be sustainable in the current energy market. 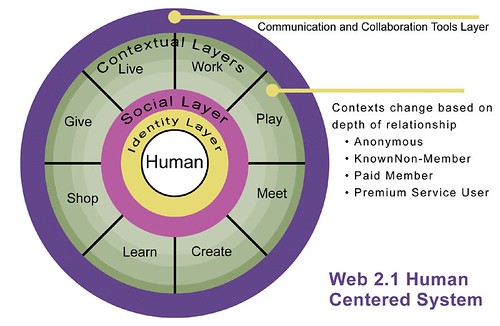 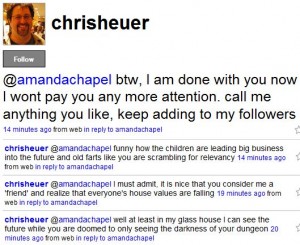 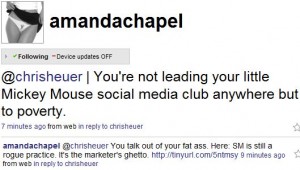