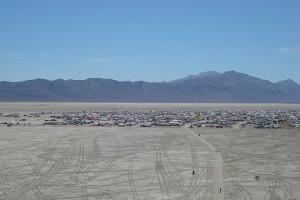 I spent the last week moving from one climate to another, sometimes multiples in a single day thanks to my first trip out west to survive 5.5 days in the desert. Before I left, I would have never thought I would have come back from Burning Man 2008 with a lesson for work, but in fact I did. Don’t get me wrong – I came back with a bunch of other lessons too, like Tuesday is the new Thursday and Lake Tahoe is a good place to wash away the whole BRC scene and get to see some very cool sights, like a random Kiss concert.

So where to start? Well at the beginning…

So the trip to Reno is a long one, at least from Atlanta on Delta. We spent the whole day making our list so Em and I land in Reno and we are off! Well sorta, we wanted to synch up with Genghis, oh yeah everyone gets a playa name. I’m Echo, you don’t need to know why – it’s another post, say next week-ish. So we catch up with Genghis and the Barbi Death Camp folks to get the low down on what to get, just to make sure our list is remotely correct. The group rattled off the expected list:

Should have listened a little better, but I was excited. So off to the nearest Target, the liquor store and Long’s we went – we spent the next hour or so speed shopping and off to the playa – fast forward 6 hours…. The ad hoc/text based rendezvous at the gas station the group was just the first lesson in teamwork – these folks stopped in route to help a couple of kids from Atlanta who are obviously out of their element.

The Playa – A Big Dusty City

So we show up to the playa – it’s a little warm and the place is still under construction but from like 3 miles out you can tell this is no ordinary camping thing. We pull into our camp at 3:30 and Dart and somehow we beat Genghis, our camp sponsor for lack of a better phrase, who left at least 40 minutes ahead of us on our way to Weeeee!ville. Even without our sponsor in hand, I go about to introduce myself and the first person I introduce myself to, was a cat I’ve know for like a decade – Marty/Frater. So this has got to be a good sign, right up to the point he offers us a juice. Oops – forgotten item 1. This began the first real discussion of what we forgot? It also started one of many discussions on what had happened previously on the playa and how you just won’t know what you need until live through your first burn.

One thing that became apparent very quickly in camp is everyone we had already met from Fickleodeon was willing to make make sure the folks around were having a good time and that they were safe. To that end, fun can’t start until you’re setup and Marty pitched in to help us setup and we pitched in to help him move his camp to a new location.

With our little piece of playa in place, we coasted through the rest of the afternoon on sunscreen and liquids into the evening. As sundown approaches so does the nightly neighborhood wander and prep.

During our evening prep we find our next set of forgotten stuff – no lights, not even a glow stick which I would have thought my wife had hidden away in some backpack, since she brought with her a party kid heritage, not to be confused with a raver heritage, but nope. So there we are – a couple of darktards on the playa waiting to get run over by midnight bikers who can’t see us as we make our way around the streets of the city. Marty to the rescue – lights and glowsticks. No barter necessary – gifted, thanks Frater.

Since we were there on early passes, most everything was in a state of setup and in fact until we left on Thursday, things were still being setup. After chatting with folks around camp the first night the common theme is you ALWAYS forget something and your list always getting bigger EVERY year. I immediately was struck on how presumptuous everyone was on next year’s list during our first night chat, but I moved on.

After setting up the bar, stage and other gear we decided to go to town for a camp ice run and restock for us. So we rode into Empire for a restock – beer, fruits, vegetables, silver, plates, ect.. basically whatever we could buy that they had there at the local general store in say a 200 person town in the desert. Reasonable product assortment, but not complete enough to address our gaps in total.

Yup – we still forgot stuff on the second stocking as well, nevermind the selection issue….I think the heat does something to your short term memory.

Upon our return from the store the finishing touches were being applied to the camp, after everyone pitched in the morning and setup the 20×30 revival tent, the shower and a most ingenious evaporator for returning the gray water to the environment I found on the playa, thanks to the mad welder Mongo. What’s gray water? It’s waste water from coolers, doing dishes, brushing your teeth… The goal of this event is to make sure while we have a good time we need to respect the natural environment, which mean no waste water into the environment, so Mongo built a cool contraption to introduce it safely back into the environment – an evaporator. Burning man is a leave no trace event – the playa effectively becomes the fifth largest city in Nevada temporarily and within weeks of the event ending there is no trace that 10 story towers, ginormous crane requiring art, make shift diners, bars and clubs sustained almost 50,000 people throughout the labor day weekend and the prior week.

Just so you know – a revival tent is really easy to put up with 11 people, not sure it is possible with under 4.

Many hands make for light work

Apparently the desert is one of the harshest climates EVER – no really, you can’t imagine it without experiencing it — I tried, I was wrong. We burned through most of our sunscreen in 3 days and didn’t have painters masks or bandannas – which is a problem when the dust kicks up. Especially with an asthmatic on the team. It wasn’t a problem for long – folks in the camp had extras so we could go out and explore the playa during the storm!

The first place we went was to catch up with Antron. At his camp Sally and host of others were hanging, but the dust storm was a little much so our list of places to go became a list of 1 – there. So we spent the next like seven hours in camp injustUS, where they had an incredibly chill shade and dust structure to waste away time with tunes and chatter. We also went out that night to watch a little house music with Ted and Bunny on the playa. This Fire Rave thing/camp was complete with like 20 foot fireballs which accentuated the drum beat and twin screens for projecting highly orchestrated visuals for the way loud house music.

So Monday night closed with about 400 folks on a corner of the playa (2:00 and Esplanade) watching DJ Dutch mix it up with fire and bass until the morning. At least I think it was Monday – time is a completely relative thing at burning man.

With time not a real variable the day on the playa is pretty simple: –

Thursday only made it to wander around 1 last time and take camp down, but even the breakdown showed team work were we redistributed our beer, water and foodstuffs.

So where is the lesson in this rambling play by play? I think it starts with what I went with – stuff stuff and a network. Quickly I learned that the folks I was able to catch up with more valuable than what I brought.

In BRC it’s not what a person has or can do, it more about what a group of people can do. To me it seems pretty straightforward – every person has a list and everyone’s list is different – lesson’s learned, interest and an understanding of what others are bringing to camp, like say a blender or a disco ball. Like with any task one might encounter, having the right network of folks or camps, having the right skills and working together is key for success – perhaps even more than being prepared.

No matter how much you plan there are always things that come up that require something you don’t have at that particular time. Being reliant on others is not traditionally a position of strength, but in the right environment which encourages team effort you can find success and fun by utilizing the strengths of folks.

Not every scenario is a survival gig, like Black Rock City, but most require you have a near approximation of the right stuff and the right attitude to get things done – dust storm or not. As folks in the workplace what can we do to better understand what folks bring to the camp? How can sharing our lists other folks in camp strengthen a deliverable?

Everyone we met forgot something and each of those items no matter how well prepared a camp was, could have made life just a little bit better for the group. While I originally thought it was presumptuous to think we were going again next year on the first day, in retrospect, I think we were making our list when we cracked our first beer and drove the first stake into the playa.