I’ll trade you 3 lifestreams for 1 blog

With all the bluster around blogs being dead AGAIN, I thought I just might approach the topic from a personal perspective. The theory being floated around is that blogs are being replaced by lifestreams or at least something smaller than blog, if it is not a lifestream.  A lifestream is a series of links, short content and general real-time communication which represent your life.  Think Facebook wall post and Twitter.

The premise of the latest death knell is that things are going real-time and there isn’t much real-time about blogs, so they must be dying.  At least that is a theme which appears to be developing on the demise of blogging.

Real-time communication while interesting, ultimately doesn’t allow for true synthesis or analysis, it is clearly good for witty retorts alike, but seldom is something I come up with in real-time as valuable to share in the long run.  Think about those great ideas you have when you are brainstorming and the next day when you come back to the list the next day or think about it for a while it just doesn’t work.

Net-net – An idea or comment could be good for the moment, but longevity of something requires a little more thought – even if it is retweeted a bunch.

It’s All About ME Anyhow

I started my blog to have a central repository of ideas and content which I could refer back to and if it happended to be of interest to others, then cool.   Over time I’ve been using my blog for both content I create and for sharing content from others, so I may be sorta lifestreaming, but never really thought of it as such.   Although, I see sharing folks content in the purist form as providing access to others who may not otherwise fish it out of a twitter stream or their increasingly clutter RSS reader.  If you are like me, I have every blog I ever added in Google Reader and way too many tweets in under 5 minutes to stay on top of what is really out there or what might be hidden in a lifestream.

While this blog may at times have a lifestream feel, it’s not like I’m really going to integrate Twitter or move everything over to my Tumblr account, but over time, I’ve found myself sharing more morsels of good content, than creating my own. This is a function of time, not interest or relevance.   Jeremiah puts it best around the latest uprising:

It seems as if blogging is becoming old hat, or at least evolving into something smaller, faster, and more portable. I’m with Louis Gray, (who has finally blogged his stance –great graphics) I’m not going to give up my blog, instead, I think of it as the hub of content, and the rest of the information I aggregate (notice the Twitter bar up top and the Friendfeed integration below). To me, joining the conversation is certainly important, but it doesn’t mean the hub (or corporate website) goes away.

Over the last 30 days I’ve been integrating my life more and more with my blog, but that’s not to say I’m going to quit blogging, like Ruebel, but I’ve made the decision that if I find good information that I want a repository for, then my blog is as good as anything and hopefully others will see value in it.  During one of the last turns at the blogs are dead crank, Brian Clark indicated:

the early bloggers who gained pseudo-celebrity status because they were, well… early, are dwindling in relevance, at least in blog format.

I think it just might be the whole pseudo-celebrity thing which is dying, microblogging is an equalizer for the masses and allows more people access to pseudo-celebrity, if there really is such a thing.  I’ll take cold hard cash over a celebrity and debt any day. What am I saying? Well celebrity is interesting, but doesn’t pay the bills.  I’ve been at dinner twice which two different “celebrities” in the past 6 months whose credit cards wouldn’t support an <$50 bill – ouch!

Twitter and other platforms are changing the shape of the conversation and the number of participants and if you want a larger audience, then perhaps you should change it up a little, but abondoning a platform is probably not the best way to go.  If you want to remain a pseudo-celebrity then you might want to declare blogging dead, it just might sell some books and increase your relevance by citing the obvious – people have limited attention spans.  That doesn’t mean that blogs are dead, just that more people are participating.

Novels are SO DEAD!

Well ok, maybe not, clearly the bound book is getting challenged, but even those aren’t dead.  That of course begs the question how can novels survive if bits are what folks want to consume, must be that it takes all kinds or another way to look at it is that your target market might be different.   There is only so much content a person can come up with which may be why some are moving to shorter venues.  If I focused on 140 characters at a time, I’m fairly sure I’ll never run out of things to type, but maybe things to say.

While it might seem that blogging is less relevant among the 140 character crowd, not sure that real time does it justice.  So here is Steve Ruebel’s declaration:

Blogging feels old. Publishing today is all about The Flow. Posterous, my new home, feels more like flow and where the web is going so it’s time for me to do the same with my publishing, which will become daily once again!

It seems more like Steve is trying to publish daily more so than anything or I may be getting it wrong.  I wasn’t aware that daily publishing is what made a blog or even weekly, if that’s the driver then perhaps one should re-evaluate the decision criteria.  Louis Gray nails it:

In the last two years, the rise of microblogging tools and lifestreaming services has given blogging a less-prominent role on everyone’s tongues, but it, in my opinion, is as important as ever. One just needs to make a conscious decision as to what type of data is most appropriate where. Longer, more thoughtful pieces with graphics and type style should go on blogs.

The interaction on Twitter, FriendFeed or other services while interesting, it’s not about critical thinking per se, which is why I try to blog and share ideas.  If all we cared about what the headlines, then we should all just get our news from the “newticker” on the bottom of CNN.

Find your persona! Be your blog’s product manager

So I’m sitting at SOBCon and I’m amazed at the interesting content and discussions online and in the room.   The side discussions at the table and on Twitter are just as engaging, if not more so than the formal presentations – definitely lively as you can see from the above Tweet from @amandachapel.  For most of us there are a huge number opportunities to change the path forward based on the things learned during the sessions.

The biggest thing so far at the conference is understanding what a persona is in context of blogging.   Not a buyer persona, but the persona you put forth on a blog and I realized that Brian Clark hit a chord with the concept that you need to a develop a persona, one that’s authentic and one that you as a person are willing to invest in.

Clark’s recommendation of finding your persona is definitely something that I’ve been working on over the last year.  If you look back to when I first started here it was all over the place from a content perspective and at points of laziness the content may still be a little meandering .   That being said, I’ve continued to refine the topics and narrow the focus over the last year and the readership has grown multiples.  Subscribers and comments have grown mainly because the content consistently addresses a market need for product management and marketing/brand folks.

This narrow focus has helped me become a better marketer and product manager in general.  Most recently I’ve apparently become an archetype for a product management buyer persona for Pragmatic Marketing, which you can see in the screenshot below.  This essentially represents the coolest thing I’ve had happen with this whole blog thing to date.   To that end, my personal experience is very consistent with the Sobcon discussions throughout the last couple of days around focusing your content and developing/evolving your persona. 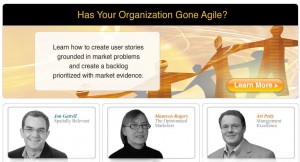 Lorelle’s presentation from last year was the key nugget I took away – have a purpose or mission on your blog which can be explained in under 10 words.

Persona’s are pervasive!  Bloggers, social media types and marketers in general ya need to know your personas.    The other thing which occurred to me is that — where personas and their problems intersect are more or less how markets are defined/emerge.    Blogging is more than just creating content (features) and setting it free in the ether – it’s essentially a market plan.

So I’ve not only come to this by way of Brian’s content, but if I look at the lesson’s learned by some good folks who have shared their marketing ideas with me here previously, they can easily be abstracted to blogging:

Find a way to be your blog’s product manager – know the problem and the persona’s – not just buyers persona’s, but your own.

Persona’s as it relates to social media and products is not an easy thing in social markets, which is why it is one of the 4P’s of Social Media being examined at the 2009 Mountain Social Media Summit.