Thanks to all for the wonderful discussion!

Who are you? Where are you going? 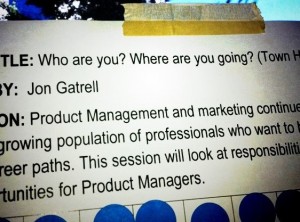 Thanks to everyone who voted. Again a great discussion thanks to all of the participants – now go create that career plan!

What is Your Career Plan in Tech Marketing?
View more presentations from Jon Gatrell
September 10, 2011 by Jon Gatrell

Are you new around here?   Stick around and add the rss feed to your reader or follow me on twitter.

So the Seattle interview coach‘s insights on the Google interview process is fairly interesting and made me think about how I might handle these alleged actual interview questions.  While I’m not sure these are real questions, it’s worth a little fun.

Google’s hiring process has been talked about online by many folks and the experience of being a member of Team Google is varied from a great freakin thing to just a bad experience.   While the interview below is fiction, I did have a strange call with Google HR myself in 2005 which I only remember as odd.

So in the spirit of trying to think how I might have actually done with some of the questions which could be thrown around during a product management interview at Google, this is my take on being interviewed by 3 folks at Google.

Interviewer 1: Why do you want to join Google?

Well, I’m not quite sure I do want to join Google, but you have to take the interview right?  I mean you have the most interesting data set which would be cool to analyze in context of a given product or market.  Y’all got everything on everything, B2B, B2C, B2G AND random life insights.  I just think it would be exciting to look at the nuances in your data and see what I could do with it.

Interviewer 2: What do you know about Google’s product and technology?

I suspect you would like a little more than it’s cool, right?  To that end, I guess I would want to put a little more of a boundary around it, since your product portfolio is so diverse.  As a user of search, gmail and one of the lucky people to get a Wave invite early, I guess I would say that your technology is more about changing the world than anything else.

Interviewer 1: If you are Product Manager for Google’s AdWords, how do you plan to market this?

I probably wouldn’t use AdWords, it would be just a little too cliche and dali-esque.  Really good question though, but I’m confident I wouldn’t want a recursive loop product management gig.  How about we talk Postini? Google Earth? Something I have an interest in.

Interviewer 3: How would you re-position Google’s offerings to counteract competitive threats from Microsoft?

ME: BING! I was wondering how long it would take until Microsoft came up.  Do you really think Microsoft is the biggest competitor? The Amazon cloud? Apple?

Well if you insist it is MSFT, then I would probably put it this way: While my parents like the pretty pictures on Bing and to search on their health conditions because they are more of a hypochondriac in their 70’s than most, I’m not convinced this is your target market.  Is it?  Do you want to own the geriatric segment? I mean patience is a virtue, we all get old some day.

Well, I guess then it is just pure brute force brand spend if you are concerned about Redmond that much.  I would also consider enhancing your MSFT related search terms with mainly negative marketing information and propaganda.  Or you could encourage each of the Google fanboy’s on the planet to purchase one share of MSFT stock so they could more actively participate in harassing Ballmer at Microsoft quarterly and annual shareholder meetings.

Interviewer 2: You are shrunk to the height of a nickel and your mass is proportionally reduced so as to maintain your original density. You are then thrown into an empty glass blender. The blades will start moving in 60 seconds. What do you do?

I’d wait for a while and see what happens.  The funny thing about quantum physics/mechanics is it is all about the observer.  I really like the original density piece, it adds to the panic level of the interviewer and avoids the “F#$k it, I’m as dense as a diamond, bring it on blender!” option.

Interviewer 3: How many golf balls can fit in a school bus?

It depends is the easy answer, because ya need to know if it is a short bus, school bus, a metro, tourist bus or crazy Guatemalan chicken bus.  But to be definitive with a number, 176,400.  The beauty of Google Voice Search on the iPhone is that you can look up stupid trivia in milliseconds and do massive calculations on the fly.  Since you’ve already created the technology to handle these types of questions I am not sure I’d hire a product manager who was proud that he could work all of this out in his head.

Interviewer 1: So how would you explain a database in three sentences to your eight-year-old nephew?

Wow, what a coinkidink! I actually did this for my 4 year old just the other day when I was working at home doing some massive inner and outer joins on a some customer data I had.  I told Prescott “databases are just a way to manage large data sets and establish relationships.  It is important to know that even though a relationship exists it doesn’t really mean anything.  Kind of like when you tried to convince me the guy in the giant chicken suit at the fair was the brother of that killer chicken kebab we just ate.  Just remember this – correlation doesn’t mean causation and you should be able to avoid a bunch of pitfalls in life”

Interviewer 3:  How much should you charge to wash all the windows in Seattle?

What is the time line to completion? Is it a long term contract or a one time gig? What kind of sign off process is involved?  It’s hard to answer if you don’t know the service level expectations.  In theory, I could wait until the next rain and invoice everyone.

While I like the last option, invoice for nothing in the spirit of governmental largess, I think $0 is what I should charge because we shouldn’t be washing windows at all.  I hearken back to the Google motto of “Do No Evil.”  Window washing is a waste of money, damages the environment, and exploits vulnerable workers.  666 window washers have fallen to their deaths in the past six years.  Google should be at the forefront of the window washer-less office movement.

Interviewer 3: You have to get from point A to point B. You don’t know if you can get there. What would you do?

Are you high?  Draw a straight line, duh.  First the golf ball question, now this theoretical spatial dilemma with no reference points other than the before-mentioned A and B.

Interviewer 2: Four people need to cross a rickety rope bridge to get back to their camp at night. Unfortunately, they only have one flashlight and it only has enough light left for seventeen minutes. The bridge is too dangerous to cross without a flashlight, and it’s only strong enough to support two people at any given time. Each of the campers walks at a different speed. One can cross the bridge in 1 minute, another in 2 minutes, the third in 5 minutes, and the slow poke takes 10 minutes to cross. How do the campers make it across in 17 minutes?

Can you repeat the first thing again? The Doritos the other guy was eating to stave off the munchies attack got in the way of me hearing the question.

Interviewer 1: There’s a latency problem in South Africa. Diagnose it.

Can you say business class to Cape Town, a command line, packet loss metrics and a bunch of trace route data?

Thanks for sharing a little fun with the fictitious interview leveraging the questions available online of things which just might be asked in a Google interview, maybe.