Thank goodness not in syzygy

So apparently this kid fresh with a license parked his relatively new vehicle during [tag]low tide[/tag] and returned during [tag]high tide[/tag]. Not interested in moving content towards [tag]astronomy[/tag], but syzygy would have been bad. 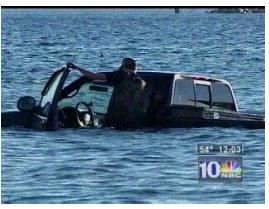 From wikipedia other uses also exist outside of astronomy:

In astronomy, a syzygy is the alignment of three or more celestial bodies in the same gravitational system along a straight line. The word is usually used in context with the Sun, Earth, and the Moon or a planet, where the latter is in conjunction or opposition. Solar and [tag]lunar eclipses[/tag] occur at times of syzygy, as do transits and [tag]occultations[/tag]. The term is also applied to each instance of New Moon or [tag]Full Moon[/tag] when Sun and Moon are in conjunction or opposition, even though they are not precisely on one line with the Earth.