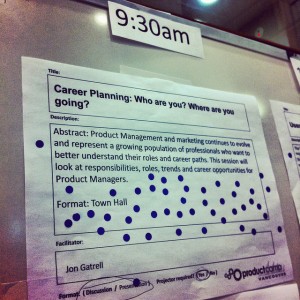 Thanks to all who voted and attended.   Appreciated the discussion and insights from the folks in the room.  Ultimately, you are responsible for your own career path and development.  Take stock in your personal career strengths, identify your career roadmap and the areas you are going to invest in for yourself.

Two reasons:  it’s simply irrelevant to them at the scale they operate on and there’s no upside to it.  I hate to admit it, but I was link-baited into reading a Slideshare presentation entitled CEOs and Social Media – A Look at the Fortune 100 CEOs and their Online Image and Communications.  I’ve embedded the entire presentation below so you can take a look at it as well.  The presentation was developed by ÜBERCEO, a blog that “follows, comments, reports and discusses everying (sic) about the CEOs who influence the business world.  Unlike other CEO blogs and websites that offer tools and information for CEOs, ÜBERCEO is about CEOs.”  The fact that the authors of the blog can’t get the spelling right on their About Us page is a clue to the quality of thinking you’ll find in the presentation.

Part of my work these days is researching the monetization of social media.  Needless to say I was looking forward to some insights about social media in the largest corporations in the world.  Regrettably, I was disappointed by the shallow analysis contained in the presentation.  I think I can sum up the entire presentation with the following quotes:

I applaud the authors taking a fact-based approach to their research.  Over a couple of week period they diligently scoured Twitter, LinkedIn, Facebook, and Wikipedia for evidence of Fortune 100 CEO’s online activity.  I cringe, however, at the relatively naiveté of their conclusions.  I am fortunate, I guess, to have met a few Fortune 100 CEOs (courtesy of my father who was a senior executive of a Fortune 10 firm for many years).  It’s pretty clear that the authors of this piece may never have been in the same ZIP code, much less in touch with such CEOs.

The value of a Fortune 100 CEO’s time is hard to put in perspective.  One way to look at their value is how much revenue and profit their firms generated, on average, every minute of every day in the year.

The largest company in the Fortune 100 generated over $14,000 a minute in revenue and over $1,400 in profit.  A typically decent sized company that generates $1 billiona year in revenue only produces about $31 in revenue and a $2.38in profit per minute.  One could infer that a minute of time of a Fortune 100 CEO is significantly more valuable than that of a typical $100 million CEO.  Now this isn’t necessarily an accurate metric or tool, but at least it provides some indication about the relative impact of how a CEO chooses to invest his or her time.

The primary reason Fortune 100 CEOs don’t participate in social media is that there is no real benefit for them.  Their firms have already pretty much reached the pinnacle of their industries.  In fact, what those CEOs crave more than anything else is anonymity.  The last thing they need is to be deluged with direct messages, @replies, or Facebook messages.  The biggest challenge they face is deciding where and how to invest their time.

For the CEOs of the other 14,436,774 companies in America, however, social media is definitely a strategy that can help drive growth and create value.  A classic example is Zappos.com, the online shoe retailer.  In ten years Zappos has gone from $0 to over $1 billion in revenues.  Zappos’ CEO Tony Hsieh has woven social media into the fabric of his company.  There are a lot of factors that have driven Zappos’ success but social media has been a critical element.

If it takes two minutes to draft a witty Tweet one might infer that such an investment in time would cost Rex Tillerson, the CEO of Exxon Mobil the opportunity to create $28,000 in revenue and $2,800 in profit.  The same tweet might cost Tony Hsieh $60 in revenue opportunity.  Since Tony joined Twitter in June 2007 he’s posted 1,725 tweets and Zappos’ revenues have grown from $840 million to $1 billion. At $60/tweet that’s about $103,000 in ‘revenue opportunity cost’ to generate $160 million in new revenues.  Now Zappos revenue growth was driven by its superior service, products, and employees.  Tweeting played a very small role in it.  One can’t deny, however, that Zappos’ entire approach to leveraging social media has played an important role in their growth.

As promised, here’s the full presentation from UberCEO.  It appears that after publishing this preso, they did a much slicker graphically oriented one that I’ve included as well.  That one has an even better link-bait title “Fortune 100 CEOs Are Social Media Slackers”

Sharing the links for the day:

Sharing the links for the day: