Brand Brilliance? White Coke Cans, saving the environment and the benefits of PR

So in October the announcement of how “Coca-Cola is ditching its iconic red cans as part of a fundraising campaign to protect the polar bear’s Arctic habitat. ” didn’t really sink in. From a buying experience, everything felt the same – the pricing, the red 12 pack packaging and the presence of a polar bear, which many of us already associate with Coke. So no issue or brand confusion there, but that is where it stopped before Coca-Cola halted the production of the white cans.

When it comes to drinking and procuring the product from the fridge is where Coke fundamentally changed the experience for diet coke and regular coke drinkers alike. Maybe that’s a little much, but from a branding perspective doesn’t Coca Cola own Red and Diet Coke owns white, right?

First you have to say kudo’s for Coke for giving back and trying to improve the habitat for polar bears. Muhtar Kent, chairman and CEO of The Coca-Cola Company said: “We want to help the polar bear — a beloved Coca-Cola icon since 1922 — by helping conserve its Arctic habitat… That’s why we’re using one of our greatest assets — our flagship brand, Coca-Cola — to raise awareness for this important cause. And by partnering with WWF, we can truly make a positive difference for these majestic animals.” 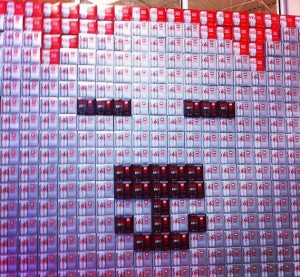 A great idea, but it does abandon a classic branding reality that “it is advantageous for a brand to consistently “own” certain colors, which provide an additional recognition cue”. It’s that lack of a visual cue which I think has created experiential confusion for me as a diet coke drinker. It wasn’t only me, but I recently had our annual open house and our guest were confused as well. It started out innocently enough, people inquiring if I had Coke and I dutifuly confirmed I had plenty of Coke. That being said, when folks reached into the fridge or coolers to grab a coke, they were met with a sea of undifferentiated white cans.

There were other anomalies I noticed throughout the day of our open house during my real-time straightening up as I walked by abandoned drinks only to notice a trend – many of the white coke cans were essentially full. Maybe not full, but 1 sip short of a full can which upon digging in I found out was caused by Diet Coke drinkers who thought they were getting diet and not regular. It appears to have been a problem for others as well per the WSJ article from last week, which even asserted a difference in taste for some folks:

Some consumers complained that it looked confusingly similar to Diet Coke’s silver cans. Others felt that regular Coke tasted different in the white cans. Still others argued that messing with red bordered on sacrilege.

Despite the confusion of the cans, I found this brand extension as an interesting case study on how to spotlight corporate initiatives and to solidify a brand’s contribution to the community, but it has for at least me made me start looking at the actual impact of this. While I’m confident the strategy to put forth an initiative to preserve the habitat was a good thing, I wonder if all the 1.4 billion white cans had made it to the market how many were wasted?

If I use my experience of between 9-11 cans out of the 96 cans we had in the house, then even at half the waste rate in my house of over 9% on the low end, as many as 64,000,000 cans could have gone to waste which can’t be good for urban, suburban or rural habits in their markets. Using a study done by Coke in the UK, a standard 330ml can of Coke embodies the equivalent of 170g of carbon dioxide (CO2e)” or nearly 11M kilograms of unnecessary CO2.

That’s I’m sure my experience is an untended consequence of the initiative and it looks like cancelling the cans will provide some environmental benefits beyond habitat donation with the reduced carbon footprint of wasted or un-enjoyed product.

So I wonder how this is going to impact the WWF?

Originally there was a target contribution of $3M dollars from Coke and the potential for increased awareness of the arctic habitat and additional public contributions via text, WWF could stand to benefit as much as say $10M (guesstimate) which is non-trivial.

So the final question I have: Could a more environmentally conscious plan have been pursued and even potentially benefited WWE and Coke’s bottom line better?

Acknowledging that strategically the initiative has done much for Coke and WWF, but I thought I would take a stab at the math. So with say $0.15 per can (some estimates are north of $.40/can) in cost of manufacturing and delivery, Coke could have saved nearly $9.5M in productions costs and committed a guaranteed $5M from Coca-Cola instead of the $3M and everyone may just possibly may have been ahead, but I doubt they would have got such a PR benefit.

I wonder what the internal and operational costs were or creating and ending the campaign? I guess it’s unimportant, but I guess Coke proves that a brand’s impact is more than the product, but the whole experience.

So what is your brand’s promise and customer experience doing for your products?