The [tag]Deck Party[/tag] seemed to have a job fair feel about it with numerous [tag]Earthlink[/tag] employees on retention packages mingling through the crowd. Not really, some did have jobs, but apparently not ones they liked. The were sponsors seemingly random, but there were free koozies and beer. Ok TechJournal South – you can spam me for another year!

ATLANTA—“You should do this more often,” was the comment most heard at the first [tag]TechJournal South [/tag]Deck Party in [tag]Atlanta[/tag], which drew 600 networkers to the square across from the [tag]Georgia Tech[/tag] Hotel and Conference Center. TJS teamed with ATDC and the Technology Association of Georgia to put on the event.

The event was held under a tent outdoors on a chilly but fine fall night.

“It was a great turnout for the first Atlanta Deck Party and it was great to see the Atlanta tech community come together for a night of relaxed networking,” says Scott Hedrick, TJS Advertising Director.

I met a very reasonable number of folk, but let me tell you Bo deserves the memory medal for his ability to retain a random name for 3 days. I clearly didn’t trust my memory, so I took a picture of his name tag.

It was a good evening, but not sure there was 600 people – I guess that’s why it’s First TechJournal South Atlanta Deck Party draws 600, NOT – First TechJournal South Atlanta Deck Party draws 600 Attendees. Being in marketing, I understand that they received 600 registrations, but not people at the event. I would put it in the 200-250 max with the whole night churn, had I paid more attention I would be willing to judge it down even more. 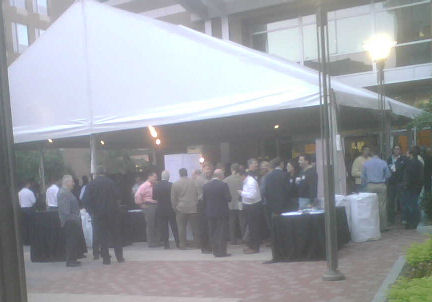 Wish my other photo’s turned out, too dark – sorry Mike, Todd and Dave. Regardless of the person count, appreciation goes out to all those I met and the folks that funded it – cheers!

Taxation and economics not quite simplified