Why are marketers so often not interested in doing something new or rethink some of their base assumptions. Too often technology marketers are too “inside the four walls”, a little too technical or distracted to go back and re-examine core assumptions. Should try and do it as much as possible.

One of the biggest challenges/rat holes many marketers get into is being unwilling to make something up or to look at your product/market in a different way. The challenge is how can you deconstruct and repackage something most everyone already has and make it differentiated. Is there a opportunity to create a position on something or highlight capabilities which in an average day might just be something you expect out of a product and call it something new? Pretty common thing for most product and market folks – you hang around a product so long you forget what is the value add. Today’s general market example of this is Pretzel Dip.

I eat a good deal of pretzel’s and I’ve never thought about buying pretzel dip, instead I spend that extra time putting mustard on a plate for dipping and occasionally adding in cheese. Pretzels have just gotten cooler – they have dips now. 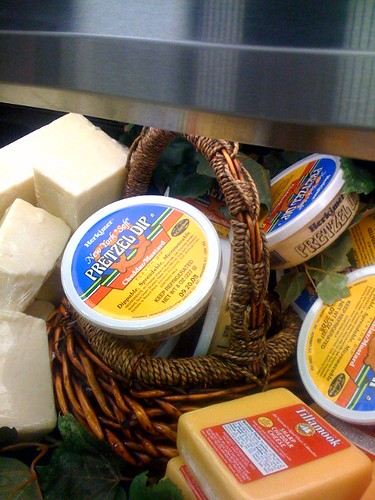 While I didn’t purchase the pretzel dip, I was definitely pleased to see someone creating a niche cheese category. The value isn’t the cheese or the mustard – it’s both together. Novel concept – Chocolate and Peanut butter

While you can never get enough cheese innovation – are there technology examples? Sure, I’ll use my hosting provider – MediaTemple.

I’ve spent the better part of the last 5 years test driving hosting providers, Yahoo!, Network Solutions, Go Daddy and a few of the other cheap providers – all had some quality of service issue I didn’t like. Yahoo! sucked with anything which required a data base, the others were slow and some didn’t have ANY customer service. After trial and error, I’m now go to my MediaTemple almost religiously, even though it is a little clunky. The control panel requires too many clicks and setting up a redirect is nearly impossible, but I’m not dissatisfied at all.

I am currently a user of a Grid Server, a product who’s sole value prop is we keep your site running. I would think that most hosting providers have some sorta high availability plan to keep sites up, but not that many give it a name. That’s the idea – sometimes just giving something a name is cool marketing.

Once you have a cool name, you can have mini-taglines like the Grid Servers “Clustered Burstability”. That was enough marketing to suck me in for the initial purchase. MediaTemple is naming all kinds of stuff and letting me know about it. It appears they are indeed naming features and infrastructure components.

In theory, with the burstability of my Grid Server, I’m good should I write anything of real interest need to scale a little. After all, I’m in to them $20/mo — Oh but wait – you NEED a container to really make sure your site stays up.

Gotta Have a mySQL Container!

After migrating and setting up my first site, I began to read about the mySQL container in my cPanel. Quick thought – hmmm, what if I do write something interesting and then I get all bound with mySQL queries? Yup, gotta have a container for another $20/mo. So while I think bought another thing I’m pretty sure I don’t need – the entry level mySQL container, I really don’t want to shut it off. So now, whether I need it or not, I’m up to $40/mo in MediaTemple services, mainly because they gave something a name, which convinced me I had to have it without TALKING to a single person ever.

What can YOU Make up?

So as you look at what you do – what is something you do which could be repositioned as a value add if you just packaged it up?

Because they said so..

How to Write an RFP: High Level Components

Gestalt & Morphology used is a Single Presentation! Brands and Motivations.