Earlier this week 5 cryptic billboards appeared in New York City, Atlanta, & San Francisco, like the one shown below: 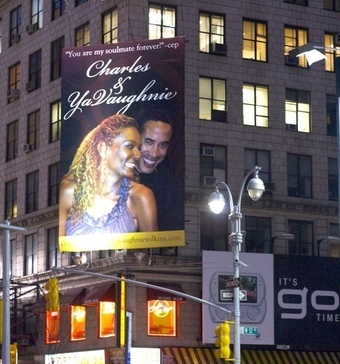 At the top of the billboard it says “You are my soulmate forever – cep” and the bottom listed a web address http://charlesphillipsandyavaughniewilkins.com/.  People originally thought it was some romantic declaration of love . . . until they clicked through to the website.

It turns out that the players in this saga are Charles ‘Chuck’ Phillips and YaVaughnie Wilkins.  Chuck is the president of Oracle Corporation and YaVaughnie is his long time mistress with whom he recently ended their affair and returned to his wife.  In what can only be described as one of the best revenge tactics YaVaughnie is estimated to have spent $250,000 on the billboards in New York City (where Chuck and his family lives), San Francisco where Oracle is headquartered, and in Atlanta.  The website, which is temporarily overloaded, has photo galleries, videos, and notes of endearment from Chuck & YaVaughnie’s relationship.

Chuck is a pretty famous guy.  He was one of Morgan Stanley’s leading technology analysts in the 1990’s and he joined Oracle in 2003 where he played a critical role in the development and execution of Oracle’s aggressive M&A strategy.  I actually met Chuck in the 1990s at an analyst day for Sterling Software when I was a corporate development executive.  One can only imagine the horror Chuck went through when someone called him up Tuesday morning and asked why his picture was on a 100 foot billboard in Times Square.  To be fair the relationship between Chuck and YaVaughnie was well known and Chuck and his wife had filed for divorce in 2008.  Evidently Chuck recently reconciled with his wife and this revenge campaign was YaVaughnie’s way of expressing her displeasure.

Internet and social media revenge campaigns seem to have become the rage recently.  Last year, a brother got revenge on his sister who ratted out to his parents that he had beer in his room – he was grounded for three months.  His revenge?  He rifled through his sister’s room and found a notebook that listed her ‘hook up’ targets and progress to date.  He promptly scanned it and then posted it on Facebook page and tagged most of the young men targeted by his sister.  You can read the whole thing here (NSFW).  Tess Chapin, a 15 year old from Queens, New York recently launched a Facebook group entitled 1000 friends to get tess ungrounded.  Tess was grounded for five weeks for missing her curfew and getting caught drinking.  Rather than take her punishment, she decided to create a Facebook group to protest her parents’ punishment and embarrass them.  The group has subsequently shut down, but Tess’ Internet fame continues, with Google reporting over 31,000 links for the search ‘Tess Chapin Facebook.’

Social media technology has enabled anyone to become a publisher of life’s indiscretions.  The UK’s Telegraph reported that some divorce lawyers are seeing one in five divorces involving Facebook these days.  You have to take your hat off to YaVaughnie Wilkins, however, for raising the bar.

Identity: Identical Choices and Opposite Positions

The year in review blog style…