I actually got caught in a conversation today around a couple of my posts around the Automotive industry and their ad spend.   The main discussion was around the reporting quality and intellectual honesty of Fox News, but I did get banged on around the spending habits and likely contractual spend already in place for GM and Chrysler.  Below is a chart from Ad Age‘s global marketing report on the Top 100 media buyers, the ad spending by category is based on 2007 spend. 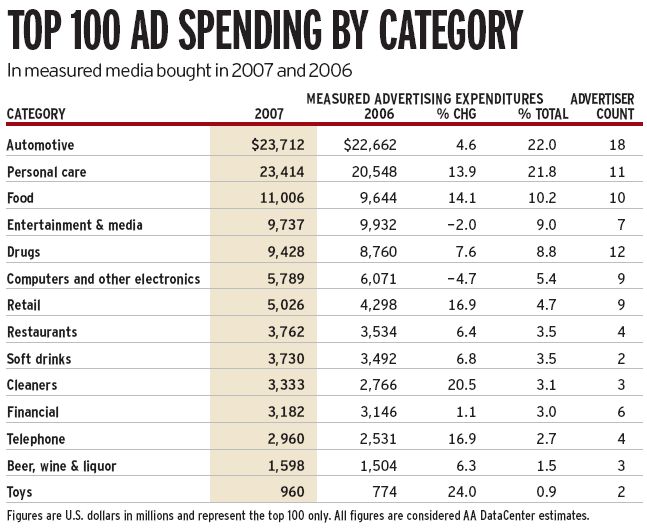 Thank you folks: Being polite is a good thing for a brand.

So a recent set of ad placements thanking the American public for a loan is causing a little bit of an uproar, at least in some cirlces.  I’m not sure that the response in the video below on the Chrysler and GM‘s ad placement is warranted.  I would like to get just a little more facts on the ad placement than I have, without it, I can only use deduction, reason and logic.

So to put it in context, one of the largest spends in the advertising industry is by the automakers, so it may not be that bad of an idea to help prop up that industry or live up to your contractual obligation.  I suspect Chrysler and GM may of had a contractual commitment which required some placement of an ad, so to view this as incremental spending could be tough.  So the question for the brand managers and marketing folks was more than likely, something like: “So we can place another ad on 0% financing, the latest GPS features or thank folks – what should we do?”

Without the facts around the placement, it’s hard to draw any real conclusions.  Missing from the Fox “Outrage” piece was someone confirming this wasn’t already paid for or a resource confirming the $200,000 spend for a full page in USA Today. Without that type of validation, this Fox news report doesn’t have the necessary diligence to justify some of the assertions. Sensationalism may be what they wanted at Fox, rather than news on this piece.

So here is the video which provides an overview of the ad spend and general information for your review:

In an Effort to be fair and balanced, a couple of questions based on the video:

PLEASE NOTE: I have no validation that the spend was already under contract, but I have no reason to think otherwise, as I don’t think any reasonable business types would spend so much money with media outlets and NOT have a contract with negotiated non-standard/discounted rates based on annual commitments and monthly placement requirements.